Thanks for the Support

Your support is welcome and much appreciated! So much that I'm happy to link back to your site for people who donate regularly or generously!

I'm all for progress. But what I question is when workflow of the latest desktop interfaces are seeming to take a turn backwards (MetroUI, OS X, Gnome3, Ubuntu's Unity etc). Like using Windows 3.11 for Workgroups all over again. Where having one opening application is the thing to do, and switching between applications is now more complex then switching a tab in a web browser.

Now we're using things like gestures, swiping movements over the touchpad, mouse hover previews of open apps or new key-combos which simply adds more steps to get to the application you're after or that are already running.

For typical users, I'm sure they don't care. I mean, hey, it looks pretty, and if Apple (and other big names) have learnt anything over the years - it's that pretty sells. 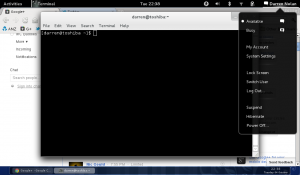 I think the last movement in terms of UI improvements I ever saw was Windows Vista's new start menu - where you could type anything you were after or even the start of it, and launch the application. Windows 7 in my opinion started getting a bit silly with combining shortcuts and running applications (thankfully I've reverted back) which made opening a new window up of an already running application somewhat more difficult than say what the quicklaunch bar allows.

I loved Gnome2, I loved how much customising I could achieve with the tool bars - especially across multiple monitors.

I thus present to you my current changes to fedora, I'm sure more will come.

Adding Hibernate and Power Off Options to the User Menu

Installing the Tint2 Taskbar to Gnome 3

Add Minimize, Restore/Maximize back to Windows

Hurray - now after reloading gnome (ALT-F2 shortcut to run, type in "r" and hit enter - save your opened documents) you should get something prettier like this.

Reply I'd love for you to leave a comment... (It let's me know I'm not just talking to myself)